I arrived at St Giles shortly after Charlemagne Palestine had begun his 6-hour version of Schlingen Blangen and walked into the near empty church.Â  I’d expected to be locked into a hard on the arse pew and had been kicking myself on the way for having forgotten to bring a cushion.Â  Instead it felt like I had the place to myself and found a nice spot about 2/3 of the way down from the organ where I could lie on the floor Shavasana, stretched out and ready for some serious listening.

END_OF_DOCUMENT_TOKEN_TO_BE_REPLACED

Following joyous jams at Lawrence’s using his Doepfer System100 suitcase, I’ve now dived into the (eurorack) modular wormhole. Rather than start with a complete unit, I’m doing it module at a time, hopefully it’ll lead to a more interesting system… but will probably take ages! Currently rocking one of the analogue systems synthi filters and a simple doepfer adsr – patching them in & out of my moogerfooger pedals…

If any wishes to help me on my way here is my current wishlist of modules. Remember, Christmas is just around the corner!

I had a wee chat with Jon from Tada Music. You can read the interview on their website. They are also offering up a free download of ‘The Sky and Us, 2 Girls’ from ‘U’. Nice One. Thanks Jon!

seems the good folk at norman records love it, too:

“Room 40 is that Aussie label with the impeccable credentials, earned from showcasing the outer reaches of electronic & avant garde, uber minimal techno & futuristic ghost pop. They’re like a big conceptual tree made out of origami orchids & unfolding, intricate birds constructed from snow crystals. That’s what the Tujiko Noriko / Lawrence English / John Chantler collaboration CD says to me. Opening with otherworldly poetry from a Japanese lady set to a subtle, organic techno ballad that I could really see appealing to fans of (especially) mid period Bjork or Cocteaus, her voice trailing wispily over a beautifully stunted half paced beat with some gorgeous atmospherics. What an opener! I love the beats on this album, they’re so pure & rudimentary, on ‘Hyouga’ they’re like echo-laden wooden snare cracks mingling with warm guitar shimmers & gently pulsing bass thrums whilst the voice meanders dreamily around the song. I think they’ve, between them, discovered the essence of the magic of 3. This is a beautifully constructed & very pure ambient record full of magic, wonder & the power of voice vs. instruments both electronic & organic. For an experimental label, you’ve got quite an accesible recording here, full of sweet esoteric vocals, dynamic minimalism & spellbinding astral sound that will totally absorb you, if you’ve ears. U is marvellous stuff!!”

Purchase the CD from NORMAN RECORDS 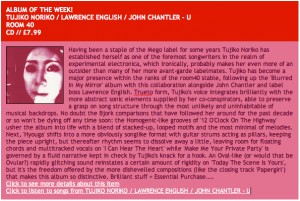